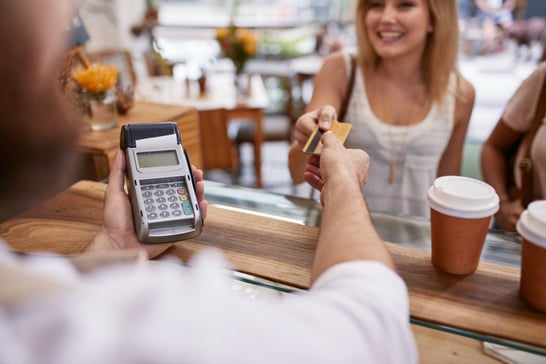 With help from Marubeni Information Systems, Planet finds success with Eggplant to automate and improve testing on its flagship POS application.

Since it was founded in 1983, Planet has been providing IT solutions and total service for retail stores. The company’s flagship product is the ATEMS POS system, developed in-house. ATEMS, well fit for sports, miscellaneous goods, apparel, food and beverage, and other specialty stores, is usually provided as a cloud service. Planet works with Marubeni Information Systems, an Eggplant business partner in Japan, to identify and implement technology that enhances Planet’s products and services.

Our data processing and help desk services are available 24 hours, 365 days a year in our data center. Providing not only the system but a one-stop service supporting daily operation is our company’s strength. Our customers can use various services, such as data analysis using business intelligence tools for store and business management, without owning the system,”
— Takahiro Kayama, Director of the System Solution Division at Planet.

POS systems have evolved in response to IT advances and societal changes — the number of specialized POS machines, tablet PCs, and terminals is growing. Also, in light of the 2020 Olympics in Tokyo, it’s critical that companies can handle various payment methods, including credit cards, electronic money, and self-service, as well as tax exemption and multi-lingualization.

Testing [with Eggplant] through a remote connection was a breakthrough.”
— Norifumi Miki, Planet

A store’s POS system provides support to employees by reading the product barcode, automatically calculating the total amount, and displaying the amount due back to the customer. When it comes to exchanging money with customers, mistakes are unacceptable. Trouble with the POS system can result not only in lost business opportunities but in damage to a retailer’s credibility. To ensure a quality, stable operation, certain risks cannot be avoided. But when upgrading legal system compliance or adding new features, a quality guarantee is essential.

In our company, there are cases when the version upgrades are carried out once in three months. It is important that the improvements to the system do not negatively affect not only the new functions but all of the other functions of the system as well,” — Norifumi Miki, general manager of system solution division, products control headquarters, Planet.

In recent years, collaboration with omnichannel retailing (a sales strategy that removes barriers between a store’s physical and online presence) and e-commerce has become necessary. Planet’s ATEMS POS system advantage is its ability to provide high, value-added services through collaboration with other companies’ systems in the cloud.

For example, by centralizing the purchase history and points of the real and online shops, one makes it possible to hold sales promotions covering both real and virtual channels. We are also progressing the development of the system to feedback customer information from retail stores accumulated in the cloud to the manufacturers. We hope to play the role of a bridge between downstream and upstream in the distribution industry,”
— Kayama.

As the POS system becomes more complicated, the importance of testing to ensure the quality during version upgrades is increasing, resulting in a larger workload that has become a serious problem. Planet introduced its first test automation tool in an attempt to improve quality and efficiency, but the tool’s performance fell short of expectations on the company’s consumption tax rate increase — teams were only able to automate 10 percent of testing.

The Limits of Manual Testing and the Need for Test Automation

In 2014, Japan’s consumption tax rate increased (for the first time in 17 years) from 5 percent to 8 percent. To introduce this change in ATEMS, Planet started development a year in advance. About 80 percent of the companies using this product require customization. While customization increases the system modification work, Planet was committed to meeting its customers’ requirements. “Each of the specialty stores has different products it sells, different functions and sales strategies. By responding to the various needs of our customers, we would like to contribute to the development of their businesses,” says Kayama.

The moment the date changed to April 1, 2014, the consumption tax rate adjustment had to be introduced immediately and simultaneously on 4,500 POS systems deployed in 350 stores by 200 companies using ATEMS. Within the preparatory period, it took 4 months to investigate the extent of the modification work to be performed for each customized system, prepare the adequate number of environments, and carry out the tests.

It was all or nothing, a situation where a mistake is unacceptable, so the tests had to be carried out very carefully and thoroughly in a limited period of time. We had high expectations for the test automation tool that we initially deployed, but it could automate only 10 percent of the testing; the remaining 90 percent had to be performed manually”
— Miki.

The test automation tool was limited to when it could be used because the software had to be installed on the system to be tested (POS device). For example, in a case where the POS system was being upgraded and the device had to be rebooted, the automation tool needed to be restarted together with the device, which interrupted the test and made it impossible to pass because the range of the test would only include operation after the system was rebooted.

Although Planet successfully dealt with the consumption tax change via manual testing, Miki felt the acute need for automation in testing and kept looking. In 2016, he found the perfect product for the case — Eggplant was quite different from conventional test automation tools.

Eggplant is now essential for us to be able to increase the quality of our product while responding to the needs of a new generation.”
—Takahiro Kayama, Planet

Testing in Close-to-Real-Word Conditions Via a Remote Connection

Two PCs connected with a cable are lined up on the table. One is used to control the test, the other is a PC used as a POS device. A demo of the ATEMS test using Eggplant has started. The program code is running on the screen of the PC controlling the test. At the same time, the automated operation is performed on the screen of the other PC. Eggplant is operating the device under test remotely through image recognition and does not require the software to be installed on the device under test. Even if the PC under test is rebooted, the PC controlling the test continues to operate. The PC under test then restarts after the reboot and the test finishes.

Testing through a remote connection was a breakthrough. A POS device does not assume the installation of various software like a PC does. We wanted to perform tests with just a POS application running on the device, but were unable to do so up till now. The fact that the tests are performed in a close-to-real-world environment is a huge advantage. Also, the fact that the tool can do not only unit level testing but also integration testing was quite shocking."
— Miki

By using Eggplant, one can, for example, automate a series of actions, such as enter sales information on a POS device, switch the connection to the head-office PC, and check whether the sales number has increased by the correct amount. 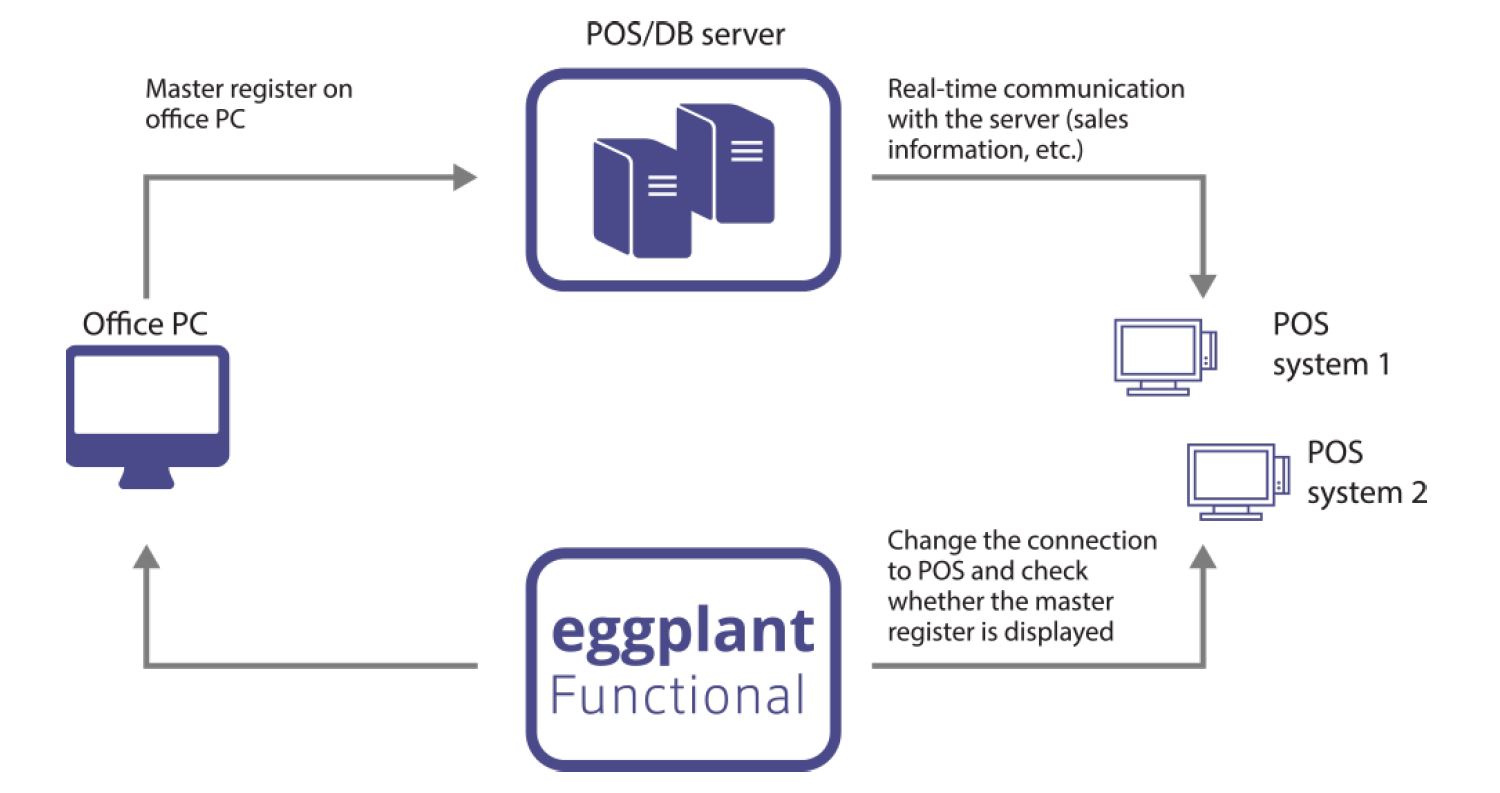 The idea that it might be possible to automate all of our testing scenarios has been spreading quickly. Again, the fact that the software does not need to be installed on the device under test and is not dependent on the OS or the application of the test controlling PC or POS device expands the areas the tool could be used,”
— Miki.

Perform Manual Operations During Daytime and Automation at Night

Since deploying Eggplant, Planet introduced another big improvement (at a level similar to that of the consumption tax increase). At that time, teams automated a six man-month worth of testing (one man-month equals work performed by one person in a month). Miki emphasized that completing the work sooner is not the aim here.

We were able to divide the operations into tests that required testing personnel to demonstrate high expertise and tests consisting of repetitive actions or regression testing that are suitable for automation. Perform manual operations during daytime and leave the work to Eggplant during nighttime. During the same period of time, the testing work we were able to complete increased greatly.”

For the tests to run smoothly, support is important.

We had a not-too-pleasant experience using a foreign tool previously when it took a very long time to get a response after making an inquiry. With [Eggplant local partner] Marubeni Information Systems, we always get a response within two working days, which is very helpful”
—Miki.

The awareness of the development team has also changed. After the development is finished, tests are run at nighttime, and the team receives the results the next morning to continue improvements. This type of development cycle leads to higher quality and improved productivity, as there are fewer cases of the product being sent back. By running Eggplant overnight, teams can determine whether the POS device is working correctly or experiences errors, and ultimately ensure that Planet delivers a high-quality system to its customers.

Additionally, Eggplant can be easily mastered by anyone, which again expands the deployment area outside of just testing. Developers are now exploring the possibility of using Eggplant to automate construction of system environments on Windows.

ATEMS’ business doesn’t end with providing the system to the customer—that’s actually where it starts.

We believe that Eggplant is now essential for us to be able to increase the quality of our product while responding to the needs of a new generation. We will continue to grow and walk alongside our customers by providing even better products and service,”
— Kayama.

“With Marubeni Information Systems, we always get a response within two working days.”