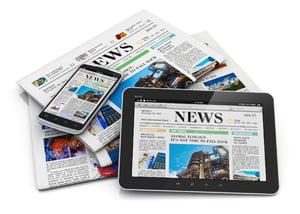 Testing cycles slashed from four days to one as cross-platform automated testing shines.

DMG Media is a leading multi-channel consumer media company which is home to some of the UK’s most popular brands, including the Daily Mail, MailOnline, The Mail on Sunday, Metro, Wowcher, Jobsite and Jobrapido. DMG Media’s portfolio of national newspapers, websites and mobile and tablet applications each month reaches more than 56% of the UK’s adult population.

MailPlus is the new tablet edition of the Daily Mail and Mail on Sunday. Designed for iPad, Kindle Fire and Android tablets, MailPlus includes all the content of the Mail newspapers, plus video and an interactive TV and Radio Listings and a Coffee Break section with 30 puzzles to play.

As well as testing the MailPlus app on specific tablets, including three versions of iOS, Kindle Fire devices and five Android tables, the software testing for the app also had to check a range of additional workstream items. This included testing the HTML and application variants, performance testing of the online MailPlus signup process and specific testing for the TV Listings and Coffee Break sections.

Testing of the app was initially executed manually using both onshore and offshore test resources, with the offshore team handling the bulk of the testing work pre-release and the onshore team executing sanity checking tests.

It took a long time to execute manual testing across multiple devices, which meant that we had to reduce the scope of testing in order to meet time frames. Human error was also a factor, as checking the same thing on five or more devices was monotonous and as a result, prone to error.”

The function made a strategic decision to look at automated testing solutions to address the manual testing challenges they faced. One of the key goals was to find a testing solution that would allow them to test the Mail Plus app across all devices and OS variants without impacting quality or release dates.

We looked at a range of testing tools, including internally developed solutions and well-known software testing solutions, and ultimately selected Eggplant Functional as our automated testing platform. We were using Eggplant Performance to load test our online subscriptions system, so we had some knowledge of the Eggplant solution range already. A key factor that made us choose Eggplant Functional was the ability to script once for multiple devices, which would immediately save us a significant amount of time."

Eggplant Performance validates that cloud and server- based applications will continue to work and perform with hundreds or thousands of simultaneous users. Eggplant Performance provides sophisticated performance and load testing capabilities that can test the widest range of technology, can scale up to simulate any load required, but is still easy to use and maintain.

In addition, Eggplant had recently released eggOn, an app that allows automated testing to be conducted natively on mobile devices, without the need for jailbreaking.

The fact that we saw we could avoid jailbreaking or rooting of devices gave us further confidence that the testing with Eggplant would be accurate. In addition, we could see that the SenseTalk scripting language would be very easy for our teams to pick up and start using.”

Developed by Eggplant, SenseTalk is an English-like scripting language that is easy for people to read, write, and understand.

After just two days of training, followed by an initial roll-out of the Eggplant Functional tool, the Mail Plus testing teams were ready to start scripting and within a month of scripting, they had made excellent progress automating the test cases.

As we had hoped, Eggplant Functional turned out to be very easy to adopt, the impact on resources during adoption was minimal, and our testing coverage is progressing quickly. The support we have received from Eggplant has been very thorough and comprehensive, both through being able to access information from their Knowledge Base as well as being very responsive by telephone.”

Since rolling out Eggplant Functional as its automated testing platform, the MailPlus testing team has seen significant benefits already.

App quality is going up with every release and all test cycle lengths are coming down as Eggplant Functional is being implemented. For example, the test cycle for the TV Listings section has been reduced from four days down to just one day, which is excellent. In fact, thanks to Eggplant, we are widening our test coverage to include areas that previously could not be considered."

The success of Eggplant Functional so far means that the testing team now intends to accelerate their automation strategy across more programmes of work. As development cycles shorten, the team plan to use CI to regression test daily application builds.